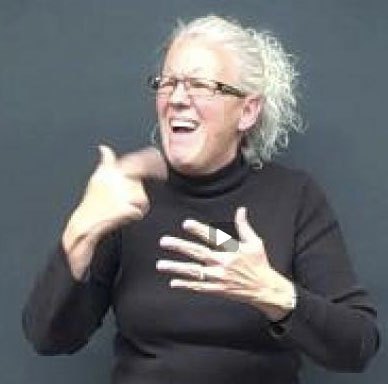 About 2 years ago, my aunt Norma came to live with me because she had a lot of health problems, including Alzheimer’s disease where she would forget everything. I would frequently take her to her doctor’s appointments. She and I could communicate well because I could understand her somewhat awkward signing. She and the doctor could also communicate, but the doctor and I could not communicate.
To solve this, an interpreter started to come to all of Norma’s doctor’s appointments so that I could get the information from the doctor that concerned my aunt’s health. With the interpreter present, the doctor, Norma and I could communicate together smoothly.
Another situation presented itself when Norma had a seizure and was rushed to the hospital. When I arrived at the hospital, there was a lot of commotion happening around me, and health providers were rapidly talking back and forth. I was worried because I did not know the status of my aunt. I told one of the doctors that I needed an interpreter. The doctor informed me that since the patient, Norma, is hearing, an interpreter would not be provided.
Even though an interpreter was available to me at the clinic where my aunt had her doctor’s appointments, such was not the case at the hospital. I became frustrated because the commotion and all the talking continued. The only information I received from the healthcare providers was a couple of short written sentences which obviously did not contain all of what they were communicating about.
It was very aggravating that I was not allowed access to information concerning my aunt, seeing as though I was her primary caregiver. I believe that in hospitals, interpreters should to be accessible not only to patients, but also for those who are in relation to, or are caregivers, for the patients.

The project contents; however, do not necessarily represent the policy of the Department of Education, and you should not assume endorsement by the Federal Government. (Authority: 20 U.S.C. 1221e-3 and 3474).